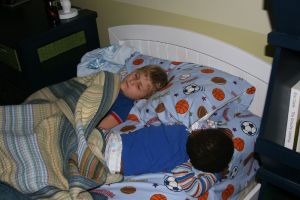 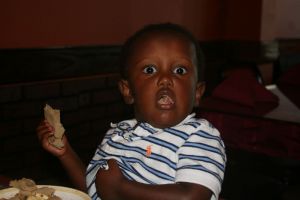 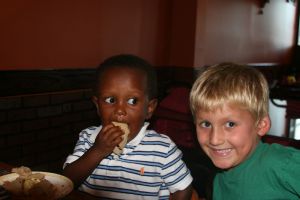 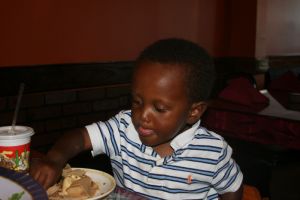 Getting Haben to sleep was an emotional challenge for me in the first few months. It is just so hard to use discipline or behavior-training strategies when one is so new to the family and this side of the world. We still had
him in a toddler bed in our room but put him to sleep before we came in. After a month or two of spending a couple of hours to get him to sleep, I finally realized he needed us to be to be a little more strict and consistent to build security and expectations.
I used the same process of rocking him once, then laying down with him for about 5 minutes and then leaving him and letting him cry in 5 minute intervals. When I went back in, I would just cover him and say its okay…never changing that cycle.
He did learn to get up and come out of the room and we gently reprimanded him verbally, brought him to his bed. At times we would just find him passed out in my spot of the bed and then we would just relocate him to his toddler bed in the room. After
the two months we moved him into his own room. We asked our son Liam if he would mind sleeping in their with him. Shockingly, he said yes and we moved the toddler bed in there for Haben as well as the single bed for Liam. After a few weeks we would
always find Haben in Liam’s bed. We thought he liked sleeping with Liam but found out that it was the big boy bed he preferred and Liam was off the hook to go back to his own room. Haben is sleeping great now.

Food continued to be an issue for a while. We had to make it available to him at all times for him to realize it wasn’t going anywhere. Keeping the kids away from his food, limiting sharing circumstances, and splitting food up in individual bowls
helped. On the flip side, he loves sitting in the highchair and will sit and sit and eat and eat.

Posted on June 15, 2011
Photography by Meredith Wilcke
Site by Thrive